This year was the first time I’ve attended Asylum and I didn’t quite know what to expect. After I published the rundown of the programme, it gave me a clearer indication of what to expect, but only getting there would unveil the true scale of the spectacular.

I didn’t arrive until around 2pm on Saturday, due to family commitments, so I sadly missed out on a few of the attractions that I would have liked to have seen both on Friday and Saturday morning.

There was still plenty to do though. I met with my partner who had travelled there on the Friday. I went to registration in Bailgate to collect my wristband and then we had a stroll down to the Westgate Academy for a look around the stalls. But not before I’d picked up a copy of The Secret of Abdu El Yezdi by Mark Hodder. You could choose between that and A Conspiracy of Achemists by Liesel Schwarz as a free book when purchasing a wristband. 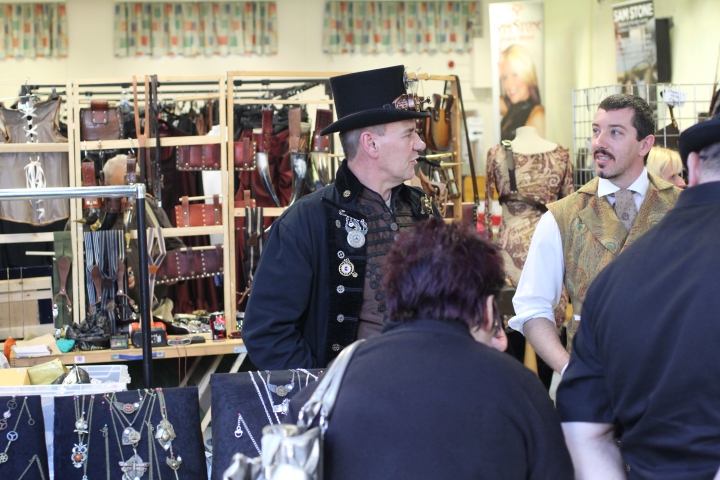 Upon arriving at Westgate, I discovered there were some wonderful stalls with the types of creations that I’ve not seen at other steampunk markets or events. Certainly not in such a large quantity. Treasures on sale included clothing such as corsets and dresses for the ladies with waistcoats, trousers and jackets for the gentlemen. There were divine handmade hats, pocket watches, braces and brooches. There were, horns, daggers and pistols. To the rear of the room there were a couple of authors selling their scribings including Sam Stone (who also ran a few writing workshops over the weekend) and Liesel Schwarz who gave away copies of her book to wristband holders. 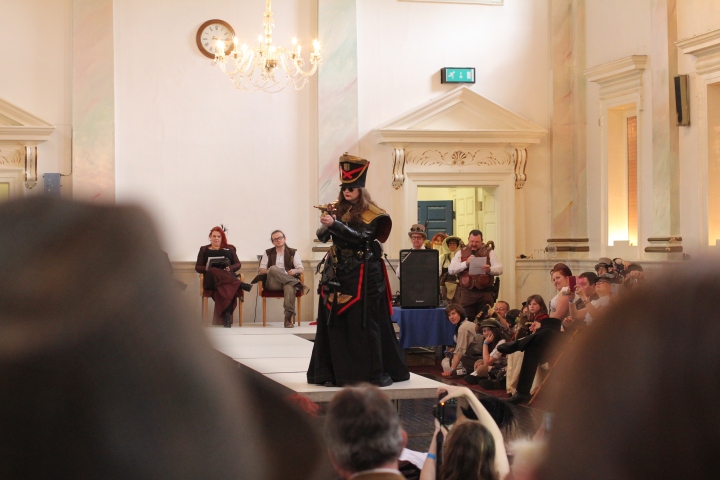 At 4pm, we attended the Costume Competition which was held in the Ball Room of the Bailgate Assembly Rooms. There were three judges including the esteemed and elusive Herr Doktor. Several contestants took part including a Fencer, Steam Powered Giraffe character and Steampunk Judge Dredd. The latter being the ultimate victor. At 5pm, the competition concluded and that was it for the day’s events as they gave way to The Empire Ball at 7pm and “Oh Dear, What Would the Major Say?” at Bishop Grosseteste University which began at 8pm. Those of us unlucky enough to not obtain tickets enjoyed the local entertainment of restaurants and pubs.

On Sunday, we began the day by listening to The Imaginarium by Gary Nichols. I’ve written a few articles about this mammoth photography project and I’m still really excited to see the end result of 4,000 steampunks marching to battle. I chatted to Gary and observed the interesting effects that printing images onto Aluminium can achieve.

After lunch, we walked around the market place in the square at the top of Steep Hill. Well known purveyors of steampunk contraptions and art included Emma Brackenbury and Doctor Geof. Wandering into the Castle grounds, there’s a long straight path that leads past the Castle to the Crown Court buildings. It ends in a circle and, by all accounts, is nick-named “The Banjo”. We were delighted to find out we were just in time for the Wacky Races. Dozens of people lined the street to watch the racers as they flew past on rickety Penny Farthings and home-made cycles. There was also a little chap in a go-kart being pushed along by an adult. The idea was to race to the end of the straight, complete one full circle, then race back. The first back being declared the winner. As the race started, the grown-ups raced away leaving the go-kart and the boy trailing behind. As he got to the circle, the men were just completing a full circuit. To our delight, instead of returning to the finish line, the men continued to circle until the young boy had completed his circuit and began down the straight to the finish line. Once he was comfortably in the lead, they began to make their way back. The look of joy on his face as he realised he was going to win was marvellous. 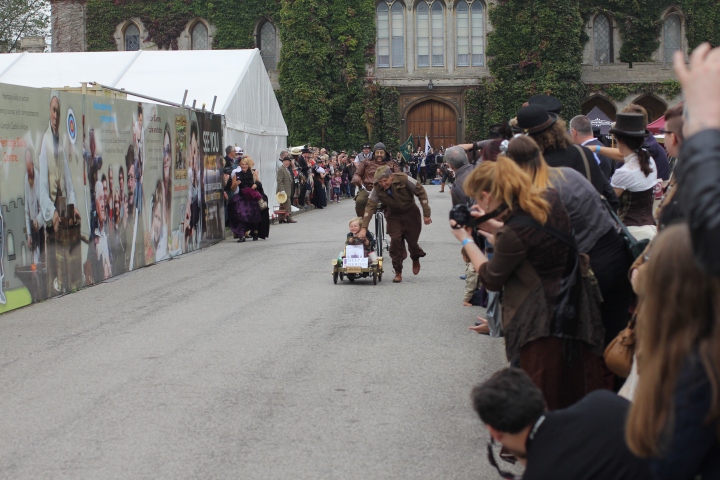 After a look around the tents in the Castle grounds, we made our way back to Bailgate for a so-called “Illicit Market” – which never happened – in the Assembly Rooms Ballroom. We weren’t allowed in at around 3pm and didn’t queue round to the rear entrance of the Ballroom where we never entered. There were most certainly not a great deal of traders all peddling their wares in a more traditional “hard sell” fashion that may or may not have been prevalent in the Victorian era. There weren’t any books or strange potions for sale, we didn’t see any steampunk inspired brooches or miniature ray guns. It wasn’t crowded as there was nothing going on and that’s a real shame because we would have loved to have seen a secretive market taking place if there had been one. Which there wasn’t.

I had to make my escape after the Market that never was and I headed for home. I felt like I only had a short stay, but felt like I’d done so much. I’ve never seen so many steampunks – or photographers – in one place and it really made me happy to know that it’s an ever growing culture that is increasing pace every day.

I’m thinking of approaching the organisers with regards to maybe setting something up at next year’s event, so watch this space.

3 thoughts on “The Weekend at Asylum VI report”