12th February 2015, UK: The Lords and Ladies of Dreadbit Games and Ripstone Publishing have announced today that their steampunk mech combat title: Ironcast, is ready to engage in battle on PC, Mac and Linux via Steam later this month. The game will be priced at £9.99/€12.99/$14.99 and players can look forward to a special discount at launch.

Ironcast is set in a war-torn alternative history; a time when refined men and women in formal attire commanded gigantic mechanical war machines, laying waste to enemies of the British Empire!

As Commanders of the Consortium of Merit, players take control of their own 7 metre tall Ironcast – each towering construct bursting with advanced Victorian era weapon systems and electrical shields. Players must face off against an invading enemy force in order to defend 1880’s Victorian England. 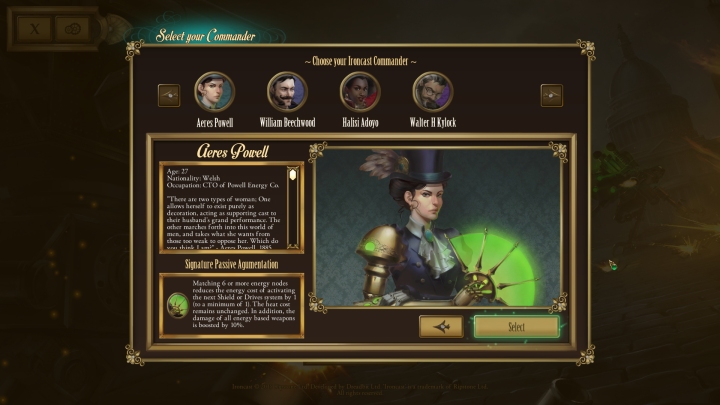 Battles are fought by generating resource nodes which in turn drive the Ironcast’s various weapons and systems. Players must choose how to spend these nodes wisely, either offensively in order to cripple and destroy their opponents, or defensively, if they suspect a barrage of incoming weapons fire is due.

Since the announcement of Dreadbit’s partnership with Ripstone last October which guaranteed Ironcast’s Kickstarter stretch goals, the development team have been hard at work implementing new features in Ironcast. Not only have the team worked to incorporate their stretch goals, but several additional improvements have been made thanks to feedback from Kickstarter backers who took part in the Ironcast closed Beta. Some of the bonus features players can expect to see in the game include the likes of; an added Commander, an extra Ironcast design, more locations and missions and new buffs and abilities, as well as a few more surprises.

Dreadbit Games will be exhibiting Ironcast at PAX East in Boston 6th-8th March and SXSW in Austin 13th-17th March – if you’re lucky enough to be attending, be sure to pay the team a visit and to contribute to the war effort! Fellow Consortium Commanders will be on hand in all their steampunk glory, ready to guide rookie Commanders in battle, in the name of Her Britannic Majesty, Queen Victoria.

To see what lies in store for soon-to-be Consortium Commanders, check out the brand new trailer here: http://goo.gl/mWihBa