Thanks to Josh Stanton and Andrew Knighton both for recommending this movie! This is my third French movie in the Steampunk oeuvre. Before I started my quest to watch and review any movie that anyone has called Steampunk, I wouldn’t have guessed there was going to be a lot to find in French. I absolutely loved all three, including Dark Portals: The Chronicles of Vidoqc (dark, gritty, adult), City of Lost Children (clever, strange and entertaining). And now The Extraordinary Adventures of Adele Blanc-Sec.

Adele is a comic book hero who was created in the 1970s by Jacque Tardi. She started out as a foil for a different female lead character. But Tardi decided he liked writing Adele better and made her the star instead. The most recent graphic novel was released in 2007, and a film directed by Luc Besson followed in 2010. I know Besson best for his part in penning my personal gateway into Sci-Fi, The Fifth Element. But he has also created characters like Nikita (La Femme Nikita) and has been a part of the Transporter series of films. Originally, Besson said there would be at least three Adele films, but so far no sequels have been announced.

The books were recently re-released in hardcover form and are available in English as well as the original French. The film draws heavily from volume 1, Pterror over Paris, (for the pterodactyl, get it?) which you can get on Amazon.com. 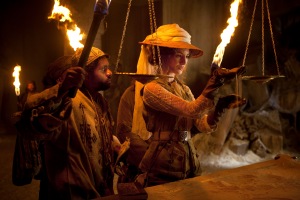 And now on to the movie. We first meet Adele on an expedition to Egypt. Her male compatriots try to ditch her but she soon proves she is the most capable one there. She leads them deep into the mummy’s tomb. But Adele is not on a search for riches, she has her heart set on a certain mummy who she hopes can be revived. She needs him to save the life of her catatonic sister. I know, it doesn’t sound like the most practical of plans, but she knows a man who has been honing his psychic abilities for just such an occasion.

While Professor Espérandieu is flexing his psychic muscles back in Paris, he inadvertently connects to the dormant life inside a dinosaur egg. Suddenly, a baby pterodactyl is set loose into the skies above the City of Lights. The professor is accused of the “crimes” that result and he is put on death row when no one believes his ramblings about the dinosaur. Louise Bourgoin makes an absolutely charming Adele and her many attempts to free him are hilarious. Thwarted at every turn, she appeals to the President of France, but his hopes all rest on a bumbling big game hunter to bring the beastie down. The professor is still psychically linked to the pterodactyl. So if it dies so does the professor, as well as all of Adele’s hopes for her saving her sister.

What I thought of the Adventures of Adele Blanc-Sec

I totally loved this movie and I highly recommend it if you need something to put a smile on your face. Bourgoin sometimes talks a mile a minute, so I am sure it would have been even funnier if I could have watched it dubbed in English instead of reading the subtitles. All the same, I thoroughly enjoyed the characters, action and story. Even the anachronisms felt like they were just an extension of the period, and I liked the whimsical brush used to paint even the direst of events in the plot.

Do you know of any other foreign-language movies that could be considered Steampunk? I’d love to see them!