I’d seen Metropolis on Steampunk lists, and I had a unique opportunity to see this amazing silent film as part of a summer film festival. The theater where I saw it was built just a year after Metropolis debuted. It was the perfect setting to really experience this early sci-fi classic.

Many of the films that end up on Steampunk movie lists are there for purely aesthetic reasons, so I was very surprised to see this one there based on the posters. This highly stylized film has a very Art Deco feel, which makes perfect sense for when it came out. So in this case, Metropolis is part of the Steampunk canon, not for how it looks, but for the message it was trying to convey and where that message intersects with issues near and dear to the Victorians, and the echoes of ideas first put forward by H. G. Wells in The Time Machine.

In addition to seeing the film itself, there was also a great lecture by a professor of film studies before it started. After the staggering number of propaganda films leading up to and during WWI, Germany was left with the means to be a real force in the new medium of film. Their major company, Ufa, created a number of big-budget silent films in the hopes of entering the market and to compete with Hollywood. Unfortunately, they overstretched their means and were soon in debt. They turned to Hollywood for financial support which gave rise to a company called Panufamet. They traded away the rights to most of their country’s movie screens for some much-needed cash and a promise of at least one German film in American theaters every year.

When Metropolis was made, it was meant to be the big budget blockbuster of German cinema that year. Due to a funny quirk of the early days of cinema, it was actually cut down from its original 2+ hour run time to only 90 minutes when it came to the states. Movies all had a 30-minute stage show at the beginning in those days, and they didn’t think the public could sit through more than a total of 2 hours of entertainment. During WWII, the original film was lost (likely melted down for the chemicals) and only the cut down version lived on.

Luckily for film lovers, in 2008 someone recovered an almost intact 16mm version of the movie and it was restored. There are still a few scenes that are missing, but it more or less back to its original greatness. (If you’ve got Netflix, you can watch the full two and a half hour version) 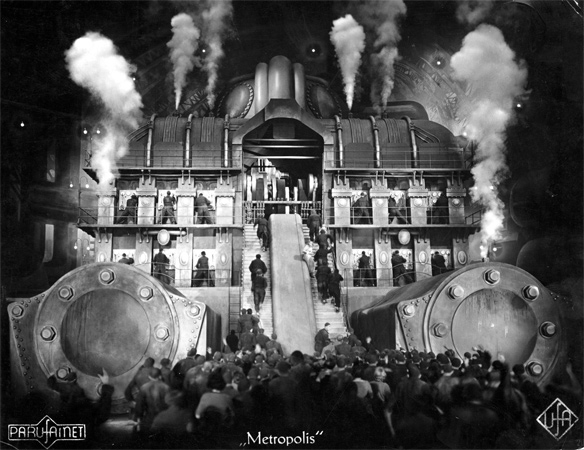 The film is set in a “futuristic” and highly industrialized city. The rich and powerful live on the surface and enjoy pleasure gardens and endless leisure, while the majority of people toil deep underground and never see the sun. The movie is based on a play that was written by the director’s wife, Thea von Harbou, but as a Wells’ fan I noted distinct parallels with the future of the human race according his books, as well as derivative works like Morlock Night.

According to The Time Machine, at some point the human race becomes divided and evolves into to completely separate species. The Eloi are delicate and childlike, their minds long ago turned to philosophy. The Morlocks are the workers who were forced to live without the sun. Over time, they became monsters afraid of the light. Metropolis paints the picture of the step in between our present and that terrifying future.

The story centers on Freder, a young elite who knows nothing about the horror going on beneath the city. A woman named Maria enters the pleasure gardens with dozens of dirty, malnourished children and demands that the frivolous people look at their brothers and sisters. She is kicked out of the garden, but Freder is so taken with her and her message that he follows her deep underground. He sees what the workers are put through and witnesses a terrible explosion that kills many people.

Meanwhile, his father, who controls all of the factories, goes to see an old rival. The mad scientist has been cooking up something special, and automaton that will herald the ruin of the modern age.

What I Thought of Metropolis

This movie was highly stylized and a wonderful departure from the same old types of movies you’ve watched. The scenes can come off as borderline absurd to our eyes. But considering it is 90 years old I think it stands up really well. The plight of the working man and his transformation into a machine himself at the hands of the oppressive upper class is a struggle that first emerged during the Victorian era. It’s presented in a large and impressive scale by the visionaries behind this amazing old film.