Books Tell us More than Stories

The literary audience of the steam era had a voracious appetite. They commonly turned to compilations of “fairy stories” to feed their fervor. Collections such as the Grimm Brother’s Children and Household Tales (1812) were read in nurseries throughout Western Europe. In addition to texts, 1800s saw an exodus as people moved away from the countryside seeking work in the cities. And they brought their superstitions with them.

Ironically, the reason for collecting these fantastical stories was often rooted in exposing the ignorance and backwardness of peasants. Yet, they took hold of the imagination of the working class years later. Through both written and oral traditions, audiences of all ages were being titillated by the strange creatures that inhabited the frightening forest. This is a setting, a place familiar to rural peasants, but far less commonplace to an Industrialized society.

Though Industrialization may appear at first to be antithetical to belief in fairies, this antithesis itself was a driving factor in their resurgence. London was not the only place where factories were built. In fact, factories began springing up all over the English countryside. Old maladies and new continued to persist, and some people blamed their problems on the factories driving away the fairies and their protection. 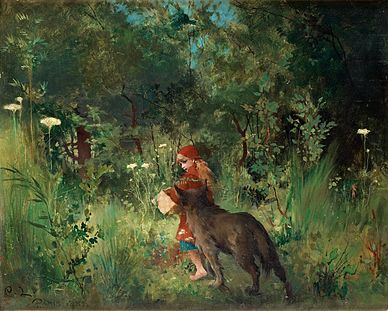 The use of fairy stories as morality tales also goes a long way toward explaining why they remained popular despite losing contact with their roots in the country. My freshman year of college my “Twice Told Tales” class spent half of a semester analyzing Little Red Riding Hood. It turns out it isn’t just a simple story of a little girl who gets lost in the woods, but serves a metaphor for womanhood, sexual transgressions, and the fear of strangers (ie immigrants). Stories were not (and are not) just a form of entertainment, but of indoctrination. This and other tales also evolved over time, and different authors used its framework to promote their own agendas.

For instance, in the original Little Red Cape, she dies at the end. There is no heroic woodcutter, the wolf eats the grandma and the little girl up and lives happily ever after, ergo the fear of the dark stranger. Cinderella is propaganda geared towards women who want to better their lots in life (please the right man and all your dreams will come true), Rumplestiltskin tells children to work hard or suffer the consequences, and Rapunzel ends up in her tower because her father was a thief.

But not everyone was taken in by just the stories, they wanted proof of the supernatural. And as that master of the fantastic, J. R. R. Tolkien tells us, “There is nothing like looking, if you want to find something. You certainly usually find something, if you look, but it is not always quite the something you were after.”

See Phoebe’s talk at TeslaCon 8 on Nov. 4 in Middleton WI to find out more!

Read more about trying to use photograph as proof of ghosts.

One thought on “Why so much Supernatural even in an Age of Reason? (Part 2/2)”