Fizzy wine has a long history, but we won’t linger on its origins (unless you want to, then click here). The most interesting part of its tale, like so many other things we take for granted nowadays, was during the Industrial Revolution. It had enjoyed a long tenure as a drink for royalty in the French and English courts prior to the 19th century. But due to advancements both in travel and fermentation technology its presence became more widely spread. This is not to say your average pie peddler or lady of the night was enjoying it. Still, the newly emerging group of wealthy merchants and factory-owner types meant that there was a wider market for luxury goods. They would buy champagne as a mark of their new fortunes. This made champagne a mark of social status and something to which people would aspire. 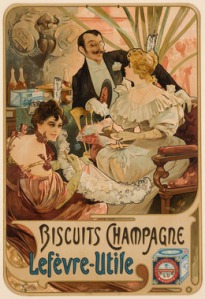 This meant that people would serve champagne at times that were highly visible. They could broadcast their status to the most people at gatherings, which included weddings and New Year’s Eve parties. As with many holidays, New Year’s has pagan roots and these festivals were often traditionally celebrated by drinking wine. Champagne became the wine of choice for ringing in the changeover from one year to the next. And as an added bonus, it is hard to drink champagne quickly due to the bubbles. So, it’s less likely that you will have unruly, drunken guests when champagne is on the menu.

Getting the Right Glass

Unless the champagne is served in a coupe rather than a flute. The flute is the tall, narrow glass most-often associated with champagne. The shape minimizes the surface area, which makes the carbonation last longer. A coupe, on the other hand (which resembles an ordinary cocktail glass of the Victorian era, see image left) has a broad bowl shape, which releases the bubbles much faster (and is much easier to spill).

One thought on “Get in the Spirit: A Brief History of Champagne”