Robert Downey Jr., Jude Law and Rachel McAdams are back to reprise their roles as Holmes, Watson, and Irene Adler. New additions include Noomi Rapace (The Girl with the Dragon Tattoo films), Jared Harris (Mad Men, Mortal Instruments) and Stephen Fry to round out an excellent cast. 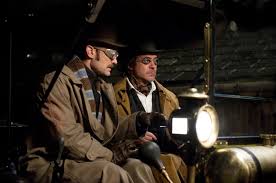 The film begins a few months after the events of the first installment. Holmes is investigating a series of seemingly unrelated crimes which lead him to intercept a letter from Irene Adler. He is so deep into his case that he totally forgets Watson’s bachelor party, and multi-tasks by taking him to a place where Holmes can find the intended recipient of said letter. The fortune teller, Madame Simza, claims she knows nothing about the letter, but their conversation is cut short by an attempt on her life. She flees before Holmes can question her further, and he’s got to get the drunk and battered groom to his nuptials. After the party, Holmes meets Professor James Moriarty, the man at the center of his investigation, and is warned to back off or people will suffer.

Watson and Mary are attacked on their way to their honeymoon, so like it or not Watson must once again aid Holmes in an investigation. The two of them follow Holmes’ deductions to a gypsy encampment where they find Madame Simza and discover the threat being leveled at all of Europe through the machinations of Moriarty.

What I Thought of Game of Shadows 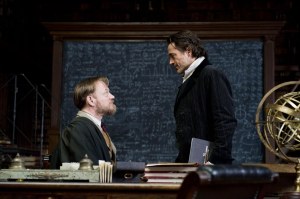 I really enjoyed this film. Some of the reviews I read from other people complained that there were conventions like the ultra slow-motion camerawork that were used too much, but I love the effect so I had no problem with it. In action films it is so easy to get lost when things move too fast, and we so seldom get to understand the inner workings of a character. Books allow a reader to get into the heads of the people they read to a much greater extent than movies, and the mind of Sherlock Holmes is one of the greatest of all times so I like seeing him plan things step by step (especially when it doesn’t always work!). 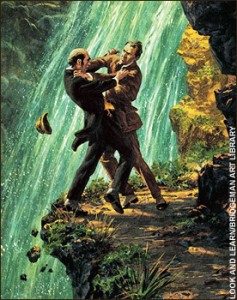 This movie was very loosely based on Sir Arthur Conan Doyle’s short story, The Final Problem, which was published for the first time in The Strand magazine in 1893. I like their choice to hold back Moriarty until the second film because his role in most Sherlock Holmes adaptations is blown out of proportion. Though it is true that he is Holmes equal in terms of intellect, he only actually made an appearance in one short story in which he (and Holmes) died at the end. Conan Doyle did in fact plan for this to be his last Sherlock tale, but his fans clamored for more and he obliged. In July I’ll be posting over several days about the whole Holmes canon, so stay tuned for more!

Did you see this movie? What did you think?