I am a romantic fool. There, I said it. I am a sucker for a good rom com, but even more so for a classic romantic flick, like “Somewhere in Time”.

If you’re more of a black heart, perhaps this review is better pushed aside. For my sappy happy darlings, read on.

On October 3, 1980, the deliciously sweet “Somewhere in Time” graced movie screens for the first time. It is a story of a man reaching through the past to find an apparent lost love. Although not truly steampunk, it does have lovely Edwardian sensibility and style and does include the science fiction effects of time travel. 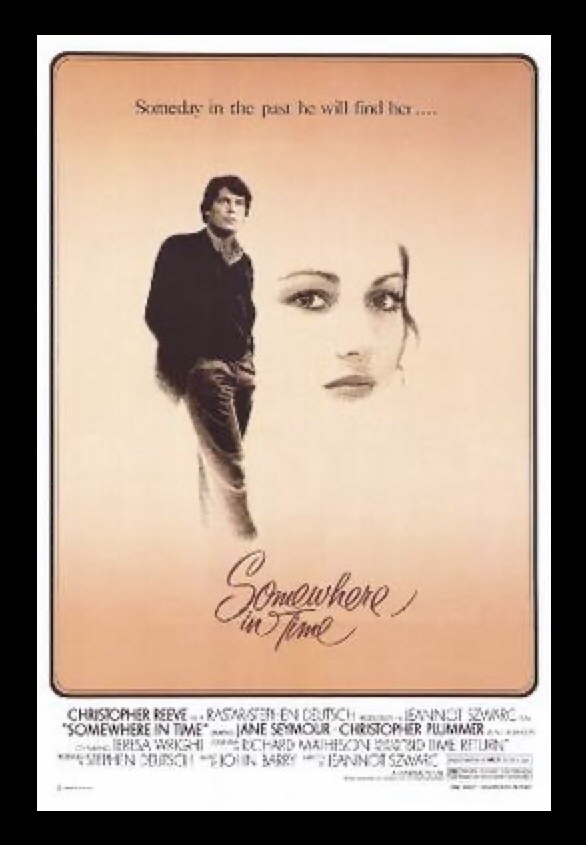 In the opening scenes, Christopher Reeve plays Richard Collier, a young, and of course, handsome theatre student, who is celebrating his new play. An elderly woman calmly interrupts his party, places a pocket watch in his hands, and whispers beseechingly, “Come back to me.” Later that night, the old woman returns home and dies in her sleep.

And so the mystery begins. Eight years later, Richard begins to investigate. After traveling to the Grand Hotel on Mackinac Island, consulting with a time travel specialist, and becoming obsessed with the photo of the comely actress Elise McKenna, Richard manages to wish his way back to 1912.

Soon he meets the stunning Elise (Jane Seymour) whose character is based on the real actress Maude Adams.

Adams was making a million dollars a year during her heyday and later became a teacher at the all women’s Stephens College in Columbia, Missouri in the United States.

Elise’s manager, William Robinson, played by the charming Christopher Plummer, becomes jealous, discourages the romance between his actress and Collier, and eventually attempts to stop it completely. There are plenty more twists and turns to this coupling, but I won’t spoil it for newbies.

The movie was based on the novel “Bid Time Return” by Richard Matheson, who also wrote the screenplay. Note that there are many differences between the book and movie, and it’s common to find that some fans only enjoy the film.

John Barry did the lush and touching soundtrack which went on to become one of his best sellers. A sample here:

Box office sales were tepid. “Time” was released the same weekend as “The Blues Brothers” and during the actors strike, which meant that Seymour and Reeve could not promote it.

However, with the rise of cable television, “Time” gained a faithful audience that now has groups on Facebook and its fan club INSITE (International Network of Somewhere In Time Enthusiasts).

The movie has since developed a sincere cult following. “SIT” fans revel in Edwardian delight at the Grand Hotel on Mackinac Island during Somewhere in Time week, usually in October, which is where Richard meets and falls in love with Elise in the movie. Seymour has visited the convention on previous occasions. Details on the event here: https://www.grandhotel.com/packages/somewhere-in-time-weekend/

“Time” even got a brief pop culture reference in Avengers Endgame.

This Valentine’s Day, thousands of SIT fans will cue up their edevices, streaming services, DVD players, and yes, even VCR’s to watch the film. I won’t be home for the standard 8pm Eastern US start time. But I will be cuing it up as soon as I get home; watching with a pocket watch and chocolates in hand.

As always, thank you for reading,

Victoria L. Szulc is a multi-media Steampunk/Science Fiction/Fantasy artist/writer working her seventh and eight Steampunk novels and various other projects. Her latest,
“A Dream of Emerald Skies”, is available on Amazon worldwide. In 2019, Victoria made St. Louis Magazine’s A-List in the People’s Choice Author category and won a Stephen Memorial Award for her illustrations in “Cecilia’s Tail” by Debbie Manber Kupfer. You can follow her works at mysteampunkproject.wordpress.com