As the temps start to warm and many of us are ready for escape from cabin fever and the virus, we turn to brisk drinks to cool the palate. One such drink, lemonade, has been a favorite for a few hundred years.

Leaves of the citron plant, the forerunner of lemons and oranges, have been found in fossils in the Yunnan Province of China. These remains date back eight million years, as estimated by the science journal, Nature.

The roots of the blend of citrus and sour orange were found in the histories of the ancient Egyptians and Jewish cultures who traded for “qatarmizat”, a citrus and honey drink.

By the 1600’s the recipe of lemon citrus, water, and sugar (or honey) made its way to Europe. It was introduced in Paris, France, on August 20, 1630. By 1679, lemonade was so popular that sellers formed a union, the Compagnie de Limonadiers.

Unfortunately for them, by the 1780’s, Johann Schweppes invented carbonation by means of a compression pump. His “fizzy” lemonade put lemonade stands out of business (at least for a while). The high popularity of lemonade supposedly helped fend off the plague.

Victorians Made It Better

As most industrious Victorians were apt to do, lemonade was improved. By the 1830’s, Schweppes version was sold across Europe. R. Whites Lemonade was started in 1845. Young visitors of Queen Victoria were often served lemonade. Bewley & Draper’s Lemonade 1894 ad showed a boy selling bottles of the satisfying drink at a train station. By 1905, the Fentiman’s company, already famous for their ginger beer, developed their Fentiman’s Victorian Lemonade, which is still available today.

In America, lemonade became the alternative choice to alcohol by those in the Temperance Movement. The Sunkist company used the phrase “Good-bye to liquor, here’s to lemonade!” prominently in their advertising to court those no longer tempted to tipple. From 1877-1881, the White House banned liquor from state dinners and lemonade was championed by President Rutherford B. Hayes. First Lady Lucy Hayes became known as “Lemonade Lucy”.

She may have been a little shocked at the 1861 publication of Mrs. Beeton’s “The Book of Household Management”. It’s recipe for lemonade touted “1 bottle of brandy”.

Lemonade was a popular treat at traveling circuses and vaudeville shows. It was noted in an 1897 article in the West Virginia “Wheeling Register”, that a concession worker started the popularity of pink lemonade by accident, when he dropped red cinnamon candies into a vat of lemonade. The “pink” lemonade breached novelty status when it sold faster than the standard drink.

Other naughtier versions of the pink lemonade origin refer to a hurried vendor grabbing a seemingly innocent bucket of water to make the days batch. Nevermind that the concoction came out pink. He called it strawberry lemonade despite that the pink color came from dirty wash water from a circus performer’s red tights!

Unfortunately, as is common with any successful business, corruption and thievery follows. Edwin Bok, a Dutch immigrant, noticed that as carriages headed for Coney Island in the 1870’s, the gentlemen could stop in a cigar shop for water, leaving thirsty women and children behind. The industrious Bok saw the opportunity to charge the ladies a penny a pail of water. When his competitors stepped in, Bok wisely added lemon slices to his water and was able to sell it for three cents a glass.

Unfortunately, those less savory vendors started using any hint of juice they could find, mixed it with cheap molasses, and specifically targeted hungry immigrants, poor citizens, and travelers. At one point, the deception and increased amount of lemonade sales was noticed in the New York Times. 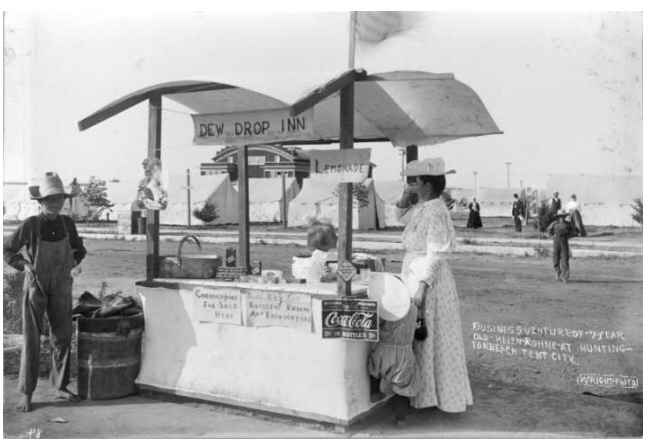 Lemonade stands became a traditional way that a child could raise money for a new bike or toy. But again, not every stand had the best practices. In the summer of 1941, a girl in the suburbs of Chicago, unknowingly exposed five other children to polio, as she didn’t clean her serving glasses after each patron.

Lemonades of all kinds continue to delight today. Stands are often seen at steampunk gatherings and faires. It’s also a great mixer with alcoholic beverages for those that like the tart and sweet flavor.

Want to make your own? Here’s my favorite recipe: https://youtu.be/7id6Hb3GhTY

Enjoy! As always, thank you for reading,

-Sources include “How Stuff Works”, “Mental Floss”, and “Nature”

Victoria L. Szulc is a multi-media Steampunk/Science Fiction/Fantasy artist/writer working her seventh and eighth Steampunk novels and various other projects. Her latest,
“A Dream of Emerald Skies”, is available on Amazon worldwide. In 2019, Victoria made St. Louis Magazine’s A-List in the People’s Choice Author category and won a Stephen Memorial Award for her illustrations in “Cecilia’s Tail” by Debbie Manber Kupfer. You can follow her works at mysteampunkproject.wordpress.com

One thought on “A Brief History of Lemonade”