As we approach All Hallow’s Eve during a pandemic, many of you may be searching for a way to celebrate indoors via a scary movie. If I may be so bold, I recommend Crimson Peak.

The Journal has reviewed this before, but every time I see a pic from the movie posted on steampunk social media, I swoon. Then I want to cry, because so many people comment that they have yet to see the film or don’t know where the images are from.

Crimson Peak is the story of a young author/heiress who becomes entangled with a baronet, his spinster sister, and the haunted house in which they all live.

Part of the issue with Peak’s invisibility to most steampunk and gothic fans, is in the way it was marketed. I saw it in theatres with review passes and was blown away by its artistry, a very common thread in Director Guillermo del Toro’s movies. However, some critics thought the plot thin and the characters too one dimensional. And back to advertising-those expecting a more splatter and jump horror movie were surely disappointed. However it has…

Production Designer Tom Sanders took Victorian Gothic architectural design to new heights with Crimson Peak. Exteriors were created in Toronto. The interior set design of the fictional Allerdale Hall was made like a real house with a functioning elevator. The attic has its steampunky best display of gears and robotic toys created by character Thomas Sharpe (Tom Hiddleston). Long hallways haunted by ghosts and moths make the house feel “alive”. 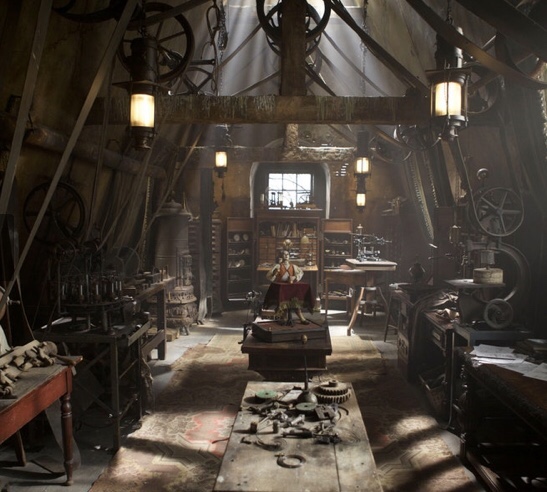 Costume designer Kate Hawley created magnificent and symbolic pieces for Peak. Our heroine, Edith Cushing, played by Mia Wasikowska is often draped in gold, to symbolize wealth, and white, to show her purity against the dark palettes of the Sharpes. Lucille Sharpe (Jessica Chastain) is terrifying in dark velvet. Hawley used genuine Victorian techniques in creating costumes, such a real hair for a braided mourning belt worn by Edith.

The special effects are wonderfully creepy with bleeding ghosts and a House that moans with the chilling wind outside.

It was these visual elements that did net Crimson Peak three Empire awards, including best horror film.

So this Halloween, pull out your popcorn and snacks for chilling eve and prepare yourself for quite the wicked twist near the end.

Victoria L. Szulc is a multi-media steampunk artist and author. Her re-releases of her whole writing catalog have started with “The Long Moonlight”, v.1 of the Vampire’s Little Black Book Series, and “A Stairway”, a revised steampunk short. Both are available on most ebook retailers world wide, Amazon/kindle, Kobo, Google Books, Barnes and Noble, Apple/iBooks, and many others.

One thought on “Like Haunted Houses? Scary Movies? Take Another Look at Crimson Peak”